Thrillusionist, escape-artist, hair-gel enthusiast, and all-around fantastic showman to thrill audiences in his new hometown with a brand-new theater and show schedule 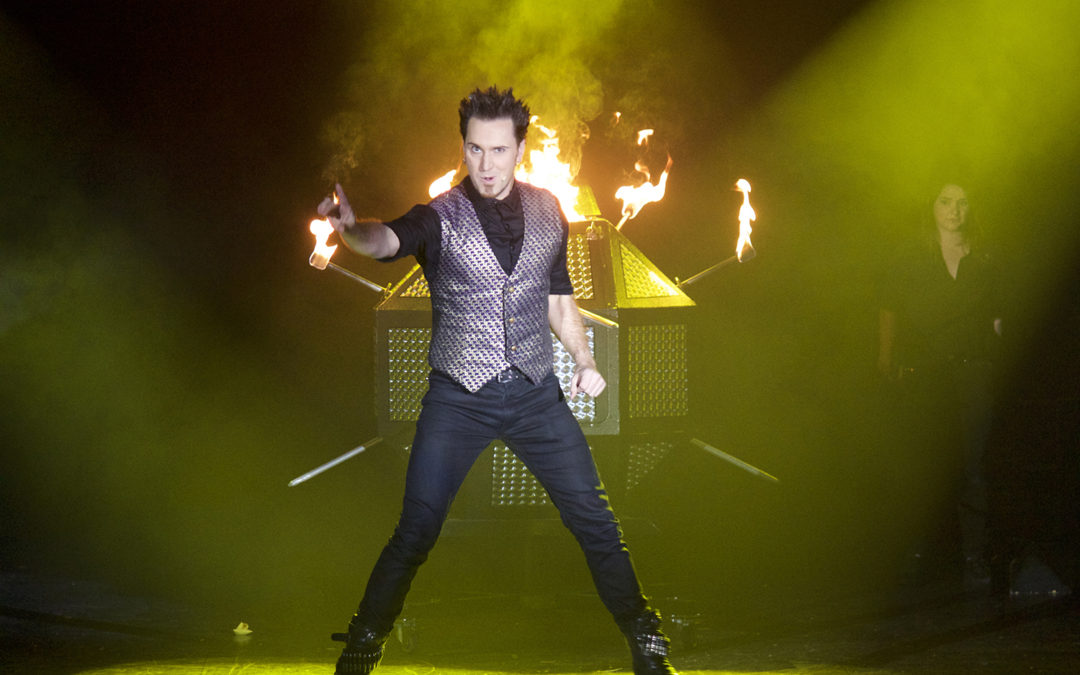 Illusionist, escape-artist, hair-gel enthusiast, and all-around fantastic showman to thrill audiences in his new hometown with a brand-new theater and show schedule. By Rodney Lacroix

David DaVinci, the “Thrillusionist” who has wowed audiences near and far — and even on the open seas, where he was voted the #1 Entertainment Show on Norwegian Cruise lines for five consecutive months (10 months total in 2016) — takes his show to a permanent location in Moab, Utah. David vows to continue his lifelong obsession entertaining the masses with a new theater and show schedule, as well as his trademarked gravity-defying hair. Looking to settle down from a hectic life on the road, David – along with his wife Jamieleigh and three-year-old daughter Capri – will be presenting their thrilling and mind-boggling stunts and illusions to vacationers, families, bored people with nothing better to do, and even those who just want to get away from children (read: ALL PARENTS AND SINGLE PEOPLE) for a night with an adults-only show on Fridays.

David DaVinci is a Thrillusionist. He is NOT a magician. This needs to be clear. A magician is someone who terrorizes children at birthday parties for $25 an hour or – in the case of a last-minute cancellation – is your drunk Uncle Charlie who has convinced himself he can juggle (he cannot). In contrast to a magician or normal illusionist, this Thrillusionist has made elephants appear, held his breath underwater for three minutes while escaping chains and locks and has even escaped a straightjacket while suspended over a den of lions. You read that right: he was suspended over a den of lions.  He has also been known to do this while dangling from a free flying hot air balloon… nuts.

David and Jamieleigh are also famously known as world-class bird trainers, which is how they happened to settle upon Moab, Utah. Even David Copperfield has hired this duo to train parrots for his 11 luxurious private islands in the Bahamas.  Looking for a place to reward their performing parrots by letting them freefly after months on the road, the couple purchased six acres just south of the town, where they’re setting up a free flying parrot sanctuary for their flock with room to expand for future conservation efforts. When not freeflying, their birds live happily in massive aviaries while David and Jamieleigh work on perfecting things like skydiving (David is certified and has jumped all over the world), new death-defying stunts, experimenting on David with lavish new hair-stylings, and, of course, the couple’s head-scratching “How the hell did they do that” illusions.

The new facility will feature four or more shows a week, Monday through Friday (except in May and October where there are no Friday shows). One key feature here is that Friday is an ‘adult only’ show where people can escape from the cacophony of children while watching David escape from flaming boxes and stuff. This is a very decent trade-off for those people wanting to have some grown-up time without while also being ridiculously entertained by the illusions and David’s fantastic drunken-heckler-squashing techniques; which I witnessed live on the Norwegian Dawn in 2016.

The David DaVinci Theater, located on the north end of town, inside of Canyonlands By Night, opens May 15, 2017 with a “Premiere Performance,” shows run until October 12th. The 204-seat theater provides an intimate setting for all, giving the audience that “up close and personal” look to try and figure out how the heck David pulls all his illusions off. The theater is also designed with such an intimate setting because David really loves when people compliment him on his discreet application of Drakaar Noir.

The David DaVinci Theater is located inside of Canyonlands By Night, with each show running roughly 45-50 minutes. All guests are encouraged to hang out after the show (for an additional fee) and take the Canyonlands By Night Dinner and Boating tours (visit www.CanyonlandsByNight.com for reference of their tours). You can also hang out after the show and David might let you touch is unwashed leather pants (also for an additional fee (just kidding (not really))).

The show IS kid-friendly but it is NOT a “kids show.” Don’t worry, there is only partial nudity and most of that is done by the birds in the act. David and Jamieleigh have performed in their shows on Disney Cruise Lines, Ringling Brothers and the Tropicana in Las Vegas.