Masters Of Illusion – A Moment With Gay Blackstone – By David DaVinci 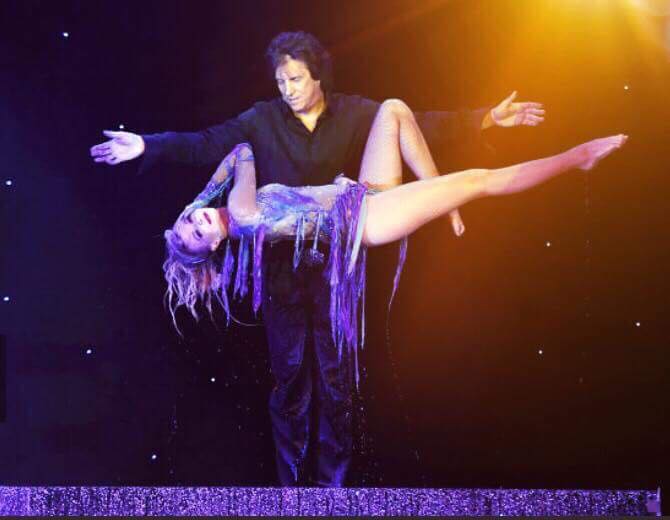 With the title of “Masters of Illusion,” the bar was set quite high.  As I walked into the beautifully lit theater at Bally’s in Las Vegas, I knew I was in for a treat.  The legendary venue that had sat vacant for nearly 3 years was about to become home to an ever changing cast of magicians, sparking interest and goals in budding wizards for decades to come.  Once the dust was cleaned off and a few lights replaced, the venue was ready! 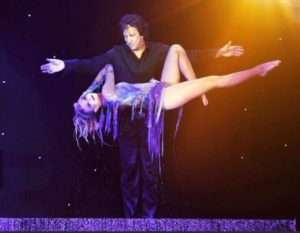 Within the 90 minute show, Greg Gleason amazed us as he levitated a lady on water, made a helicopter appear (complete with a scantily clad assistant), cut a lady in half with a buzzsaw, and performed one of the most moving gypsy thread routines I’ve ever seen.  Jason Bird integrated a drone that flew out over the heads of the audience then back to the stage, where he hurled a deck of cards at it and revealed the spectators signed card pierced through one of the legs of his modern flying card sword.  Tommy Wind teleported a motorcycle through the theater, while Chris Randall blew the audience away with his crystal clean manipulation act and hilarious mumbling off-beat humor. 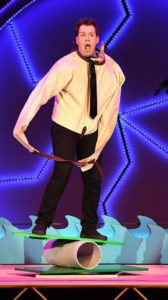 Farrell Dillon steals the show with his crazy antics and piss-your-pants humor!

The highlight to me was watching someone whom I’ve known since my early days of performing grade school shows in San Jose, but I had never seen him perform live; Farrell Dillon.  Simply put, he’s nuts, and the audience loves him!  His comedic timing is one that could only be achieved through years of hard work, thousands of live shows, and constant reviewing of his own material.

From the humble “new” beginnings 20 years ago as a widowed bride, producer Gay Blackstone recalls, “I had no idea what I was going to do with my life after Harry passed away…” Fast forward to today, and her portfolio is bursting with achievements in entertainment.  Masters of Illusion the TV show, the touring show, and now their residency in Las Vegas just to name a few!

When I asked her what the secret to her success is, she replied, “It’s just work. Just keep working because you have to be bad before you can be good!  Doesn’t matter whether your an IT person or magician or whatever, it just takes hard work, and unfortunately there’s no magic answer to that.”

During the show Chris Randall mumbled under his breath, “A huge thanks to Gay Blackstone… the lady who half the audience is pitching their resume’s to right now…” and he was right!

I asked her how many videos she had received and her head hit the table with an exhausted, “I don’t know.  I have no idea!  But I watch them all, I really do!”

One of the challenges of producing so many magic shows would have to be hiring the right acts.  With thousands of magicians with dozens of acts each, it surely would be difficult to pick the right acts without repeating material!

“There are a lot of great acts out there, who just aren’t on my radar,” she said, “We put 25 new faces a year on the TV show.  Most of the year I’m out scouting for new talent.  But it’s difficult.  Some of the acts might be amazing, but just not fit the demands of the network or the 8PM time slot.”

With an average viewership of 1.2 million people per episode, clearly there’s a line out the door for magicians wanting to get on the show, but more importantly a massive pool of audience members to buy tickets and attend the show.  With an ambitious goal of being in Vegas for 10-20 years or more, Gay Blackstone has opened up an amazing opportunity for magicians to come to Vegas and headline on the strip.

If she could only give one piece of advice to magicians who want to join the show, her reply was simple;

What’s next for Gay? “Sleep… then season 5, and a padded room perhaps.”

Clearly, creating a platform for magicians to expand for years to come, comes and an exhausting price.  But needless to say, I’m grateful she has created this incredible opportunity for all of us!

To learn more about the family friendly Masters of Illusion show in Las Vegas, visit www.MastersOfIllusionVegas.com.