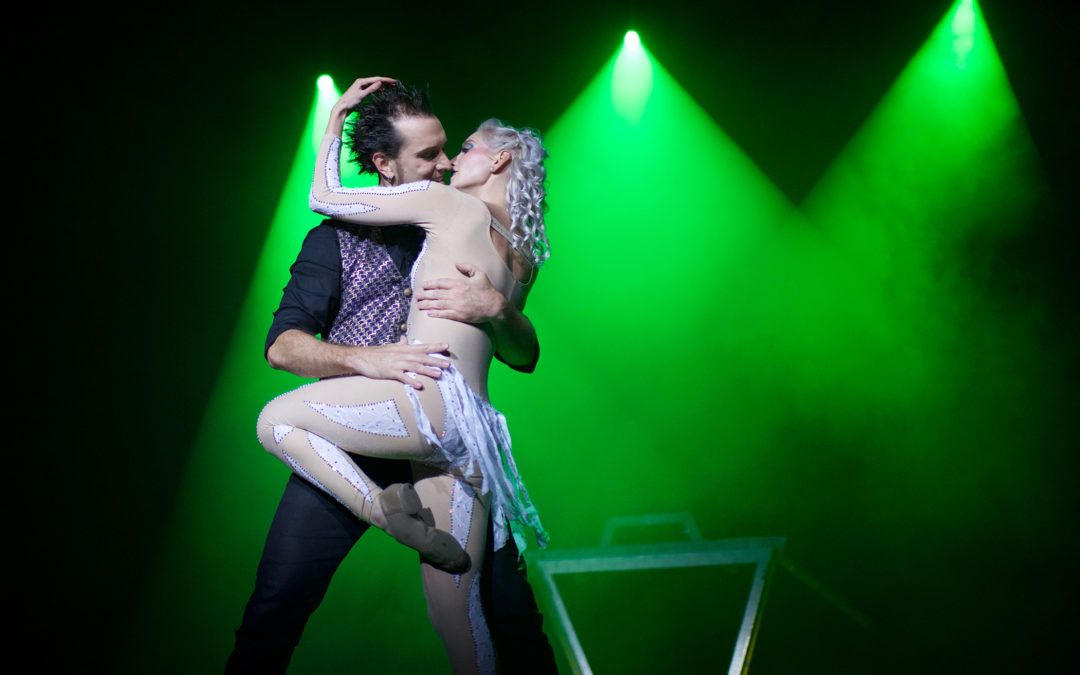 The Dawn of DaVinci
By Rodney Lacroix

“Okay. With a name like that he kind of sounds like a dink.”
That was my first response when the kids asked to go see the David DaVinci show of illusions. Granted, I should probably start watching my language around my children because I don’t want them to grow up to be little a-holes like me.

We were on the Norwegian Dawn and heading to Bermuda. It was our first-ever cruise as a family and we were all very excited. Honestly, based on the price it cost for a family of six, it will probably be our last one, as well. I’m pretty sure I could have purchased the entire Titanic for what it cost me to sleep six of us in two separate cabins. The bonus, though, was that we got double the amount of towel-animals from the cabin stewards than those people who could all fit in one cabin. Never underestimate the coolness of a towel folded to look like a penguin.
It’s magical.

Speaking of magical, we were walking the ship when we happened upon a poster in the hallway outside the largest theater. It had a picture of a guy in a sparkly jacket with some of the tallest hair I had ever seen. Behind him was a pretty smoking-hot blonde woman.

After a few minutes of looking back and forth between the woman and the epic hair, I noticed there were actually words on the poster.

David DaVinci: THRILLUSIONIST
“Can we see it?” the kids asked.
Um. I wasn’t sure.

Was it thrilling? Was it an illusion? Was I reading this wrong and it was actually supposed to be pronounced, “Thrill Us Zionist!” These were all questions I had. Obviously, I keep questions like this to myself and in my own head because I’ve been hospitalized more than once for speaking my thoughts out loud.

I looked back at the woman and then the hair. Woman. Hair. Both of them were amazing. My decision was made.

I had to see this hair in person.

We got to the theater fairly early because trying to find six seats together is pretty impossible in almost any situation. At this point I should probably stress the point that if you have two kids already, it’s probably best that you stop RIGHT THERE and get a vasectomy or something because once you ante up to three or more kids, finding lodging and seats for restaurants and magic shows gets really tricky.
That tip is free. You’re welcome.

We managed to get six seats together all in a row right at center stage. We got fairly close because magic and illusions are WAY better close up. I know this because I once saw David Copperfield in Boston and sat in the very last row of the Worcester Centrum. I can tell you that magic shows suck when the performance looks like you’re watching it from space. You end up asking questions like:

What happened?
Did his card change?
What is he holding up to show us?
Why did I pay $65 for these seats?

This got me thinking about David Copperfield dating Claudia Schiffer and now David DaVinci and this hot blonde on his poster. I immediately brought up Google on my phone and started searching “How to be a magician.”

Wife: What are you doing?
Me: NOTHING.

The theater went black and the show started. There was music. There were flashing lights. An announcer came up and began the introduction of David, complete with listing his accomplishments, television appearances and then something else but I was busy yelling at my kids to stop dancing in the aisles. Kids are really like having monkeys, sometimes. It’s crazy.

Then David appeared on stage.

His hair was everything I had imagined it would be. It was no less than six inches tall and obviously loaded with some sort of amazing hair product. It defied gravity.
Without saying a word, he began performing.

The illusions started out small. First, they involved scarves and doves, very similar to my honeymoon night and even more so because he was wearing the same, sparkly outfit I wore, down to the black leather boots and the wireless microphone headset.

I’ve said too much.

David’s exuberance and fast pace of his illusions got us all into the show immediately. His opening all illusions all revolved around bird tricks, which I found amazing because I once owned two cockatiels and couldn’t get them to stop biting me or crapping all over the carpet. How he could make them appear, disappear and turn into confetti were things I always used to think about whenever my grey cockatiel would bite me hard enough on the nose to draw blood.

Then the blonde came out.
Wife: Put your tongue back in your mouth.
Me: Flargglbelrarrgle

With David’s opening act behind him, he addressed the audience, welcoming and thanking us. He was actually pretty funny and not the dink I thought he was going to be so I immediately handed my wife a five dollar bill because she’d won that bet.

David does a lot of audience participation across his different types of shows. He gets the people in the audience involved and up on stage and performs some amazing illusions with them – like making their jewelry disappear. My kids do similar tricks like this, but with my money and free time. POOF. All gone.

I looked down the row at my kids and they were all smiling and laughing. This is no small feat when you realize that two of my kids at the time were teenagers. Teens don’t like anything except ignoring their parents, so to see them smiling was pretty awesome.

David’s show continued. It turned out that the hot blonde was actually David’s wife.

I mentally made a note to high-five the guy if I saw him later on the ship somewhere after the show. I made a second mental note to make something up just in case my wife asked why I was high-fiving him.

David did a number of audience-participation illusions, getting us involved and attempting to do what he was doing right there in our seats. The part where we each all had to make a bird disappear got a little messy, though. I’m kidding. No animals were harmed during the making of the Thrillusionist show unless you count my daughter punching my stepson because he kept poking her.

My favorite illusion/mind-trick involved a montage about David’s grandfather and a plane crash he was involved in. In the crash, his grandfather survived, but his beloved bird was lost. It was a moving story and pretty heartwarming the way David told it. The bird had a leg band with six numbers on it, but his grandfather was never able to track it down.

The trick ended with – once again – audience participation and a ball tossed around us. As the ball bounced around from person to person, the music would stop and the person left holding the ball would yell out a number. This happened six times, each time my kids screaming in anger when the ball would come close to us but they couldn’t reach it. Kids get really angry really fast and for very stupid reasons, FYI.

After the sixth number was given, David walked to a model of his grandfather’s airplane and removed a leg band from a bird. As you probably have already guessed, the numbers appeared on the band exactly as dictated by the six random audience members. Very cool trick.

Also, at this point, David’s hair had still not moved. I made a third mental note to ask him what type of gel he used. So amazing.

His last trick involved an open-walled box, and an illusion to make his wife disappear and then – moments later – reappear inside of it. Why he would want to make his wife disappear in the first place, I have no idea, he did not have any montages or slide shows entailing any marital problems. Personally, I think all couples should learn this trick because making your spouse disappear during an argument and then reappear after things have cooled down seems like it would save a lot of marriages.

The show over, the place erupted in applause. This should not be a surprise, because I later learned that David’s show set a record with Norwegian’s highest entertainment rating, and was the #1 entertainment show for the ENTIRE FLEET for five consecutive months. That’s amazing. I’ve never been #1 at anything and this includes events where I’m the only one competing.

My teenage daughter was astounded and amazed, something that usually doesn’t happen if a line of new shirts at Hot Topic isn’t involved. It was an incredible show and an incredible night.

I got to meet and talk with David at some of his other shows on the ship. He is an extremely nice, fun and friendly guy who certainly seems to appreciate his fans. Looking back now, I can’t believe I forgot to ask him about hair care. I’m such an idiot.

Both of my boys bought his magic kit so they could do some of his tricks when we arrived back home. When I say my boys “bought” his kit I mean “they used the card I had on file with the ship” so essentially these kits belong to me. I plan on using them as soon as I can find some birds to train that won’t bite the crap out of me.

I already have my black sparkly outfit and leather boots. I also have scarves. I also have handcuffs, but I didn’t see if any of his illusions use them, so I am definitely going to need to catch up with him again to ask. This is a no-brainer, though – because if I ever get the chance to see a David DaVinci show again, I am jumping at the opportunity.

If it’s on a cruise, though, I’ll probably wait until my kids are old enough to pay their own way. Either that, or maybe I can learn that trick David did where they can just disappear in a box until we’re on board and then – poof – reappear in our cabins.

I’m still getting two cabins, though. The towel-animals are so worth it.